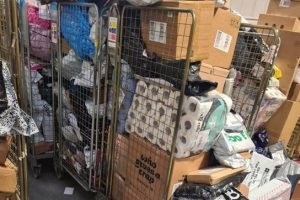 The Evri depot in Plymouth has been forced to make changes following a recent visit from the Health and Safety Executive. It comes as pictures are shown of piles of packages stacked high inside and outside the depot. It is understood concerns had been raised by staff members about the stacking of deliveries inside the depot, resulting in HSE representatives attending the site.

One staff member, who wants to remain anonymous, claimed packages had been ‘falling’ on workers and claimed employees had been forced to sort parcels outside instead of inside the depot as a result. Evri has denied this. The Evri staff member claimed staff shortages have resulted in some packages without things like correct addresses on being piled up inside the warehouse.

Last week Health and Safety Executive representatives visited the depot in St Modwen Road, Plymouth. Evri (formerly Hermes UK) opened the new depot, behind Marsh Mills Retail Park, in July this year. An Evri spokesperson said: “We can confirm that we have implemented a number of changes following a meeting with the HSE as the health and safety of our people remains a top priority.”

A HSE spokesperson said: “HSE routinely visits businesses as part of its regulatory function and can confirm we recently visited the Evri depot in Plymouth.”

“We are not aware of [falling parcels] happening, there have been no reported accidents and this did not form part of the discussions with HSE.”

An anonymous worker said the situation inside the depot had “improved” since the HSE visit.

They said: “Somebody complained to HSE about the stacking and cages inside the depot. Ever since it’s like they don’t want us inside. But the way parcels are now being stacked is much neater.

“There’s a different section where customers’ parcels are everywhere. It’s not a backlog, but parcels where you have something like an incorrect address. This can be rectified in minutes but there are not enough staff to do so, so it’s all piled up inside.

“Packages would fall on you and heavy boxes are stacked on top of the cages, not at the bottom.” 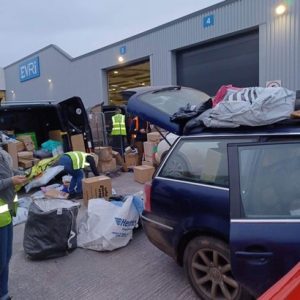 A spokesperson previously said that due to “capacity issues as a result of Christmas volumes, couriers are sorting their parcels outside in an adjacent car park where there is safely room for 27 vehicles off the road at one time. There are rain covers to prevent parcels from getting wet.”

Evri recently apologised for the actions of two employees at its Plymouth Depot after a customer captured staff on video chucking parcels into cages. On several occasions, the footage appears to show the employees failing to successfully throw certain packages into the crate.

The firm said at the time: “We will get in touch with the local team to understand what is happening here. Whilst it looks like these parcels contain clothing and are unlikely to be damaged, this behaviour is unacceptable and does not meet the standard we require for handling items with care. We apologise to anyone who is concerned.”