The face mask has become the worldwide symbol of the Covid-19 pandemic. Dräger is making a reliable contribution to the global demand with high quality FFP masks.

The production plant turns out face masks every second: Since the end of last year, a fifth Dräger location in Gateshead, Northern England, has been producing particle-filtering half masks (filtering facepieces; FFP) – almost exclusively for the staff of the National Health Service (NHS). With more than one million employees, the UK’s National Health Service is the largest employer in Europe. “I am delighted that Dräger’s new personal protective equipment (PPE) facility is opening in Gateshead,” said Jo Churchill, Parliamentary Under-Secretary at the Department of Health and Social Care, at the occasion of the official opening in January 2021. “This represents another significant milestone in establishing more resilient supply chains.”

Risk of infection while singing: Singers should keep a distance of at least six meters to the front and three meters to the side so that their breath and droplets are not transmitted from one person to another, according to an aerosol study involving the Bavarian Radio Chorus.

FFP masks can also protect against SARS-CoV-2 infections. The virus is transmitted through aerosols while talking, sneezing, or coughing. Human proximity heightens transmission risk: “A person can infect several other people, who in turn can infect several other people,” says Professor Gérard Krause, epidemiologist at the Helmholtz Center for Infection Research in the German city of Brunswick. The number of cases rises exponentially. People who are asymptomatic unwittingly pass the virus on and mutations start spreading.

In spring 2020, global supply chains for protective equipment collapsed. “We were sent into battle without the proper equipment,” said one British surgeon. Today, medical protection is a basic requirement, and not only for doctors and nurses. At the start of June 2020, when the WHO recommended that people should protect themselves and others by wearing a mask, demand soared. A previously simple consumer item became a matter of survival. Everyone needed a mask to get safely through the day at the office, on the bus, and in the supermarket. Overnight, the demand for face masks was about ten times higher than the global production capacity. China, which previously covered almost half of total global demand, imposed an export ban, with several other countries following suit shortly afterward – including Germany and the USA. “We increased our capacity by 50 percent within the space of two weeks,” says Peter Carlsson, head of Dräger mask production in Sweden and South Africa. Production there continues around the clock. At the same time, people are working at full capacity to increase global output. Three new production facilities – in the USA, UK, and France – were built within a matter of months. Since the fall of 2020, they have also been supplying N95 and FFP masks to protect against the coronavirus. While the production hall was being equipped in Northern England, the new British mask crew learned the ropes from their Swedish colleagues. Production started in the UK three weeks after moving in. “It was a very tight timetable for a completely new factory – with new technology, new material, and many new colleagues,” says Malcolm Irving, head of global supply chain management at Dräger. Quality takes priority, while customer needs are crucial. “We use a classic lean pull manufacturing system and produce the goods as soon as the customer orders. This enables us to virtually eliminate waiting times, bottlenecks, and resource wastage.” If needs change, production is adapted accordingly. The British NHS has ordered around 50 million FFP3 masks, thus far.

Mask production requires cutting-edge technology. The fleece manufacturing process, developed and patented in the former East Germany many years ago, made the task of suddenly ramping up capacity a challenge. The primary material used in manufacturing fleece is polypropylene, which is obtained from crude oil. This is used to make spunbonded fleece from continuous filament and melt-blown fabric from discontinuous fibers for an ultra-dense filter with an electrostatic charge. “We started to secure more raw materials at an early stage, even before we had more machine capacity,” says Michael Reinhart, head of the breathing protection business unit at Dräger. “This allowed us to swiftly commission further machines.” The quality is dependent on the raw material and the way in which it is processed. “We regularly take samples and test for breathing resistance and filter efficiency,” says Malcolm Irving, “both before and after manufacture.” Continuous quality inspections are standard practice worldwide. The frequency and methods are closely coordinated and tested in conjunction with the research and development laboratory in Lübeck. Every new component undergoes an extensive approval process here before it is used in global production. Temperature and breathing resistance tests are also conducted and the aerosol deposits in the filter material are also analyzed (filtration efficiency test). Masks made by other manufacturers are also put through their paces here. “We are developers and manufacturers and also offer mask testing services at our testing center in Lübeck,” says Rainer Klug, executive board member for the safety division. By the start of 2021, the laboratory had received around 170 testing assignments from the state of Schleswig-Holstein, the police service in Hamburg, and others. “Unfortunately, around two-thirds of the tested masks were unsuitable for use,” says Klug. The main reasons included insufficient filtering performance and the associated reduced protection as well as overly high breathing resistance levels. At the start of the coronavirus pandemic, the company’s own testing center almost doubled its capacity.

Obernai (German: Oberehnheim), Alsace: In October 2020, another Dräger production site started making FFP masks. Partnerships are also planned with local service providers in order to bolster the supply chain for high-quality raw fleece material. “Our job is to use our skills to serve the needs of society so that we can put an end to this unprecedented pandemic situation,” says Yves Le Gouguec, managing director of Dräger in France. Having now been commissioned, several dozen new employees at the site produce in excess of 50 million FFP2 and FFP3 masks every year for medical and commercial use. “With our technological innovations and local knowledge, we are strengthening the health systems in Europe and can minimize dependency when it comes to vital goods such as protective equipment,” says Rainer Klug. Obernai primarily supplies the European market, but it can also produce masks that meet the US standard (NIOSH) and serve other international markets. What isn’t needed in Europe goes to the Dräger distribution center at Frankfurt Airport – and from there to destinations throughout the world.

According to the World Trade Organization (WTO), fragile transport chains have been the second-largest weakness since the outbreak of the pandemic. The flow of goods faltered as border controls and trade bans were introduced at short notice. Trucks were going nowhere. Quarantine and lockdown made flights impossible for a time. Those who were still manufacturing had to factor in higher air cargo costs. The global cargo fleet tripled to 4,500 within a matter of months in 2020 due to the conversion of decommissioned passenger planes alone. While emergency facilities were in a state of alarm and permanent stress, the supply of goods came to an abrupt halt. “With our five manufacturing sites, a global production network has now been created, allowing us to quickly respond to peaks in demand,” says Michael Reinhart at Dräger headquarters in Lübeck

Montgomeryville, Pennsylvania: At the end of the first quarter of 2020, Dräger was chosen by the US Department of Health to supply NIOSH-approved N95 face masks – with a lead time of five months, five weeks of which were needed to build the factory. Production started in September 2020. “Get things done! That was our motivation,” says Lothar Thielen, managing director of Dräger in North America. “We have the expertise and are able to help.” The principles of lean production, where neither time nor materials are wasted, also apply here. “Using local raw materials, we can quickly supply large quantities of masks for people on the front line,” says Thielen. 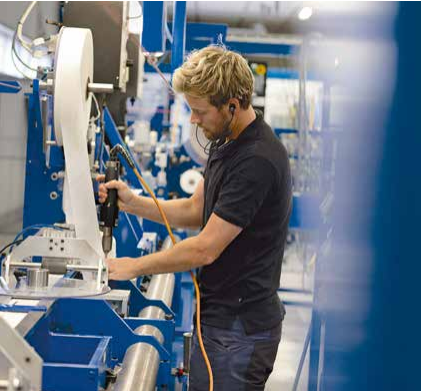 Countless colorful pieces of fabric represent the global face of the coronavirus pandemic. Since the outbreak started, around two-thirds of the global population protect themselves with a face mask. At the peak of the second wave, in January 2021, surgical and FFP2 masks also became mandatory in German stores and on public transport. “FFP2 masks offer better protection for the wearer than the simple surgical face mask,” says epidemiologist Krause from the Helmholtz Center. The Covid-19 pandemic has forced people all over the world to adapt the way in which they live. Masks are now an expression of a person’s personality, as has been the case for decades in Asia. The people there wear them during the flu season and in the spring to protect themselves from pollen and hay fever. The masks also offer protection against air pollution and reduce the spread of germs in overcrowded and poorly ventilated subway systems,” says Christos Lynteris, medical anthropologist at St. Andrews University in Scotland. Yet there is also an ethical aspect. East Asians wear masks out of respect for others. “The longer the pandemic goes on, the more likely it will be that masks will become an accepted part of Western social norms,” says Prof. Mitsutoshi Horii, sociologist at Shumei University and at Chaucer College Canterbury in the UK. The people of Japan in particular never really gave up the habit of wearing a mask after the Spanish Flu (1918 to 1920). It is now an everyday accessory like an umbrella. Before leaving home, people grab their keys, cell phone, wallet, and mask.

“Demand will most likely drop after the coronavirus,” says business unit manager Reinhart, “but it probably won’t shrink to pre-pandemic levels.” In large cities with air pollution, but also in Australia and California with recurrent forest fires, such masks are vital to protect people from smog and smoke. “We are planning to continue making good use of our machines after the coronavirus,” says Reinhart. FFP masks not only halt the spread of SARS-CoV-2, but also other infections such as chicken pox, influenza, and tuberculosis. The activity of acute respiratory diseases “has been at a record low level in the winter months since the hard lockdown at the end of 2020,” according to the Robert Koch Institute (RKI) in February 2021.

It currently remains to be seen whether the virus will disappear, return in regular waves, or continue to exist as an endemic disease. However, some people, such as health professionals, have no choice: “Even if many people are vaccinated against the coronavirus,” says Malcolm Irving in Gateshead, “FFP masks will remain the norm for people to protect themselves in certain situations. And safe breathing protection is also indispensable in industrial settings and in the emergency services.”