A Poll and Response by Scott Crichton 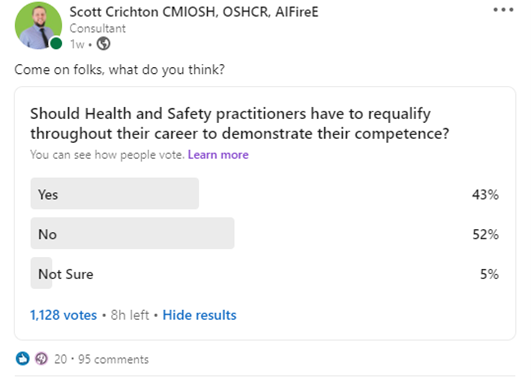 I am truly blown away by how many of you have viewed (some 32,000+), voted (1128) and commented (95) on what is my first ever LinkedIn poll and I am very grateful to every single one of you for your input, so thank you.

It goes to show the power of collective thought of a community whether that be positive, constructive or somewhere in between.  I believe that the health and safety community is one of the best there is around and we can collectively shape the future for all our families and for future practitioners to come.  I’m also a firm believer in listening to others (or ‘wisdom of the crowd’ as Lloyd (2021) put’s it) and so I hear your responses and hope this article addresses the points made.

There are a couple of interesting observations of this poll:

A definition of ‘requalify’ from the Collins English Dictionary is ‘to qualify again’ and from Lexico is to ‘qualify or become eligible for something again’.

Whereas there are other definitions out there (and I am sure you can find them) which include the mention of retaking or updating of qualifications.

If using the Collins or Lexico definitions, it does not seem to indicate directly to qualifications but to pass a benchmark.  As IOSH members we must go through various stages to demonstrate our competency and often we refer to this (as one of you has already mentioned) as – SKATE – Skills, Knowledge, Ability, Training and Experience.  Let’s be clear, a single element of SKATE alone does not define competence, however a combination of each element that is continually worked upon, should.

Other words that I considered using in place of ‘requalify’ where: assessment, licence, recertification or revalidation and I am sure you can think of others too.  But let’s stick with the definitions above and the word ‘requalify’ and let’s have a look at some other professions and their approaches:

Electrical – One body, the National Inspection Council for Electrical Installation Contracting (NICEIC) require an ‘annual surveillance’ assessment for their members.  Don’t get me wrong, the idea is good, however from chatting to a trusted electrician, it’s very expensive particularly for subsequent assessments!

Gas – Engineers are required every five years to undertake the National Accredited Certification Scheme (ACS) – certificate of competence, which includes a core gas safety element.  This requires those dealing with gas not to prove their whole journey, but to prove the basics and their competence regarding any changes or updates in the previous five years.

Fire – Members of life safety registers (with the likes of the Institute of Fire Safety Managers, the Institution of Fire Engineers or the Institute of Fire Prevention Officers) are required to have fire risk assessments reviewed to remain on a register.  Again, a means in which to demonstrate competency whilst also logging CPD.

I would suggest that the original intention of the poll question was whether something like the above should be setup for H&S practitioners, however are the examples above really a suitable comparison to health and safety, or is this more comparing apples to pears?  I have no idea of the structure or employee count of the above bodies compared to IOSH for instance, nor the full ins and outs of these benchmarks, however, it is food for thought.  If our colleagues in important safety positions such as the above must ‘requalify’, then the same question should surely be asked of H&S practitioners?

Why throughout a career?

At thirty-seven and as a practitioner of fifteen years, I’m currently on the journey towards Fellowship of IOSH (If I am successful at the interview).  As a Technician, Graduate, then Chartered member a huge effort has been required to get this far and is required by all members transiting between grades.

Side note, I’ve met some outstanding members and non-members on my journey who are excellent practitioners, however for whatever reason don’t feel the need to progress through the membership structure.

Back to what I was saying, if I’m successful at the above, then I could still have a good thirty years working career ahead of me and whilst I would be the master of my own destiny in terms of professional development and my own integrity means I will undertake regular CPD.  Is it enough though in a career such as ours to rely upon a random spot check of my CPD by IOSH throughout these years in order to deem my competence?  I think it is and of course you can lose your status if you do not update your CPD, however I wonder whether an additional benchmark on top of CPD would provide further reassurance to others.

To be honest, I don’t know, and I don’t know how you could arrange shadow visits either!  To evidence SKATE and competence, a measure would need to be developed that measures our continuous skills and knowledge such as a short test, our ability such as through shadow visits and the training and knowledge that we undertake and gain (which should already be captured in our CPD).  Perhaps a benchmark would look like those the fire safety life registers.

Is CPD not enough and don’t we already have this?

Whilst yes, I believe that CPD is a great means of practitioners being left as professionals to uphold the code of conduct, I wonder whether those in whom we deal with daily know what we have had to undertake to be deemed as competent.  Furthermore, I quite like the idea that I have been entrusted as a professional to be responsible for my own competence and to apply the code of conduct.  IOSH have introduced the blueprint and competency framework as further means in which to support practitioners.  However, there is still a question for me as to whether part of the jigsaw is missing.

Are we practicing what we preach?

I should imagine that most of us are reading, attending, researching, developing and constantly reflecting on how we can be better practitioners and how we can get the same message across to our audiences with new techniques and styles. We ask others to undertake up to date training when their certificates run out, however they are not practicing on a day to day basis and are unlikely to be part of a CPD programme.  So are we practicing what we preach, I think we are, however I wonder whether more can be done.

To provide a balanced viewpoint, let’s now consider the for, against and indecisive viewpoints of this question.

I would suggest that there is greater emphasis now (more than ever) on the scrutiny of practitioners, competence and the advice being given by those practicing in health and safety.  In this poll I was not proposing that there is a retaking of a qualification, far be it, can you imagine the time, cost, effort and inconvenience this would cause all of us, including myself!  Nor did I suggest there is anything wrong or required to be changed from the existing systems in place, my question was whether other practitioners believed they’re should or shouldn’t be.

On a similar line of thought, I believe that all vehicle drivers should have to take some requalification (not necessarily a full-on driving test again) but a hybrid shortened version as the standard of driving out there these days is poor!

What are the benefits?

The hope of a benchmark in ‘requalifying’ would be to raise standards, ensure consistency and check the understanding of changes in legislation, standards and best practices.  If there was such a suitable means to ‘requalify’ then this would be about enhancing and preventing complacency, after all we are talking about people’s lives at stake here.  Some 470+ of you believe that yes practitioners out there believe there should be a form of ‘requalifying’. Without knowing who you are, it would be difficult then to determine what you believe a system looks like to ‘requalify’ and whether this is beneficial for all.

We have seen recent changes in the fire industry in terms of an Approved Code of Practice, which enhances the previous guidance documents that were released in 2011.  It appears that the fire industry has recognised the need for a benchmark to determine competency whereby an individual would have to ‘requalify’ throughout their career.  However, it also appears that the fire industry has also struggled with defining and determining competency.   We have also recently seen the misleading post nominals used by an assessor, which is shocking to say the least and I really hope that H&S Practitioners have the integrity and respect not to do this.  Having a benchmark, does that make better practitioners or create unnecessary frustration?

What are the drawbacks?

Time and money are largely the two main points I would think apply as drawbacks.

As a busy practitioner, volunteer and most importantly husband, dad of a young family, son, and friend, my time is already limited to even think about going through some form of remeasure of my competence either in place of or in addition to CPD, I simply do not have the time.  I am already busy enough and I nearly burnt out at the start of June because I was doing too much.  Some 570+ of you voted this way and I suspect for the same reasons as I have stated above and that we have already spent hours upon hours reading, studying, going through various tests and measures and interviews.  We have finally found a place of being responsible for our own development and competency, when to say no and when to advise other professional advice is required.  Furthermore, cost is another drawback in which after spending vast sums of personal money, then unless organisations paid for or contributed to this, then this is also going to be a sticking point to even begin with.

Returning to our electrical, gas and fire colleagues, as H&S has so many areas under the one umbrella it could mean that practitioners are never out of ‘requalifying’ mode or have gone broke paying for the privilege.  A place I certainly do not want to be.  Thus, it may not be practicable to run something similar and you could also argue that if CPD is being continuously worked on then practitioners are never out of ‘requalifying’ mode anyway.

In terms of whether I believe that health and safety practitioners should have to ‘requalify’ throughout their career, the answer is, at this point I’m still unsure and it appears that there are some 50+ other practitioners who are in the same position.  While I believe that we should be practicing what we preach, following our code of conduct of integrity, competence, respect and service and remaining on top of our CPD.  There is still this slight niggling in the back of my mind that asks whether there should be an enhanced means of demonstrating a benchmark has been achieved throughout our career.  What that looks like, unfortunately at this point, I do not know, but that was the original intention of the question, to gain other viewpoints on this topic.

If the right hybrid model can be found that is neither laborious on time, or a cash cow for someone to get rich from (or us to be unnecessarily paying towards), then I’m sure we would all agree it’s the right thing to do.

In closing, once again thank you all for your time and comments and I’m now off to log some CPD 😊. 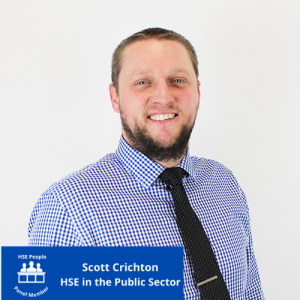 Scott has previously been a NEBOSH examiner for certificate level qualifications, is the Chair of Governors at an infant school and is separately an Associate Governor of a Community Federation comprising of two primary schools.

Scott is keen to network, mentor and share his ideas with other professionals.