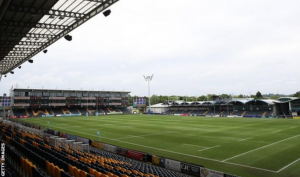 The Rugby Football Union (RFU) has given Worcester Warriors until midday on Friday to prove they can safely host games at Sixways or they will be suspended from all competitions.

Worcester must provide evidence that the local authority has issued a General Safety Certificate, and written confirmation of medical provision.

The Premiership club are set to play Exeter at home on Sunday.

However, that game has now been cast into major doubt.

“The RFU, PRL and DCMS has been seeking assurances from the Worcester Warriors owners regarding funding and potential new ownership proposals for several weeks,” a statement by the RFU read.

“All parties are concerned that the lack of available funds will not allow the club to hold matches safely for players and spectators, and for ongoing medical provision for players.”

Worcester’s future has been in doubt for weeks since they revealed they were in dialogue with HMRC about a winding-up petition over a £6m unpaid tax bill on 17 August. Total debts are reported to be £25m.

The club are still waiting to finalise a deal with a new investor after Warriors’ owners agreed the terms of the sale on Tuesday.

“Any suspension may be lifted once the club has more security of funding and is able to evidence its ability to hold matches safely,” the RFU statement added.

A statement from Worcester Warriors said: “Our staff have been working hard this week to ensure that we comply with the requirements for a General Safety Certificate and we will continue to do so on Friday morning to ensure that we are fully compliant.

“We, and the potential new owners of the club, are also aware of the serious consequences that may follow if the club is suspended from playing any competitive rugby.

“The best solution to avoid such a sanction is to ensure that heads of terms on the agreement with the new owners are signed as quickly as possible. Work continues this evening to that end.”

Earlier on Thursday, Worcester said a letter suggesting the club had been put into administration was sent out in error by the Department for Digital, Culture, Media and Sport.

Warriors issued a statement saying it was not true and the DCMS had apologised for the “distress and anxiety caused”.

This week’s announcement by owners Jason Whittingham and Colin Goldring that they had “agreed” a deal with an investor that would save the club from administration gave fresh hope.

But 24 hours later, the club were still waiting for the “final sign-off”. Warriors said on Wednesday that the agreement was “with the lawyers of the respective parties but signing of the heads of terms is required before the sale can be concluded”.

The emergence of the letter from DCMS on Thursday via social media again seemed to throw doubt on the club’s future before Warriors moved to dismiss any speculation.

“This is not true,” the club said. “The statement was sent out in error by DCMS who have apologised for their mistake and the distress and anxiety it has caused to our staff and suppliers at what is already an extremely stressful time.

“As we stated yesterday, we are awaiting the signing of heads of terms on an agreement with a buyer which would secure the long-term future of the club.”

The DCMS said that the department “continues to work tirelessly with Warriors, the Rugby Football Union and Premiership Rugby on options around their future survival”.

Warriors director of rugby Steve Diamond told BBC Hereford & Worcester the new investors “had to deliver” and that he had been told by the owners that they “were in the last throws of that”.

The club started their Premiership season with defeat at London Irish last weekend.

‘A lot of compassion’ for Worcester’s staff and players

Exeter are scheduled to come to Sixways having beaten Premiership champions Leicester in their opening game and Chiefs director of rugby Rob Baxter said they are preparing to play the game.

“Obviously there’s been a lot in the press that the game’s in doubt and there doesn’t seem to be a concrete agreement yet on people being paid who are required to put the game on,” he told BBC Sport.

“That’s out of our hands. Let’s remember a week ago people were saying Worcester wouldn’t play their first game and they did. I hope the game’s on.”

Baxter added: “Without thinking about the players, there are tens of people who are involved in running a rugby club and to think their livelihoods could go through no fault of their own is tough.

“We spent a lot of time talking about making the families of the players feel part of it and, if you’re doing that as most Premiership clubs are, it does become like an extended family and you do feel for those players – so I completely understand what it must feel like for those involved there now.

“They’ve got bills to pay. There’s a lot of compassion for that.”