An investigation into a near miss between a 60 tonne lorry and a Holyhead bound high-speed train on a Bagillt level crossing has found ‘serious operational irregularity.’

The near miss – involving a Manchester Piccadilly to Holyhead service travelling at about 75 mph and an HGV pulling a ‘baler’ used to collect scrap metal – happened just before midday on August 17 last year.

A report by the Rail Accident Investigation Branch [RAIB] published today has found that railway signals had not been set to stop trains from approaching the crossing.

The crossing serves a private road linking the A548 dual carriageway to a car spares yard located around 800 metres north west of the crossing, and to the shore of the River Dee.

RAIB investigators found the rear of the baler had cleared the crossing between 57 seconds and 1 minute 10 seconds before the train arrived.

Had there been a collision between the train and lorry there would have been a “substantial loss of life and large numbers of serious injuries” according to data from the ‘all level crossing risk model.’ 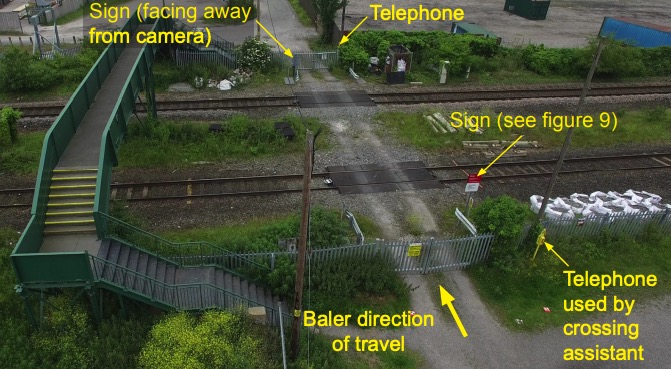 A person assisting the driver of the HGV – who was walking back over the crossing to close the gates behind the vehicle – was alarmed to see the approaching train and ran off the crossing.

The investigation found the vehicle driver’s assistant had telephoned the signaller and obtained his permission before crossing the railway.

But the signaller had not stopped trains approaching when a large vehicle needed to cross the railway, as required by the Rule Book.

The RAIB report states “the vehicle driver’s assistant had not told the signaller that the vehicle was large, as required by a sign displayed at the crossing.”

Investigators found that the signaller did not ask the relevant questions to establish the size of the vehicle, and did not know that most people using this crossing did so with heavy goods vehicles, although some Network Rail staff were aware of this. 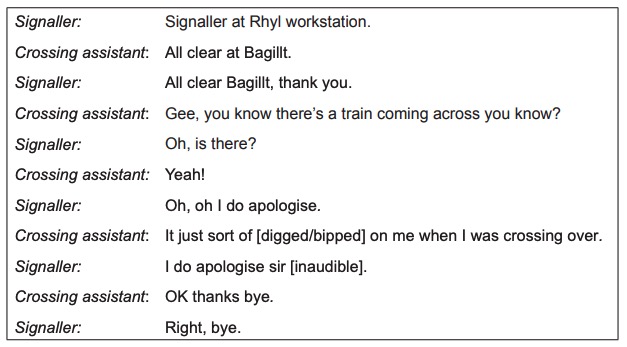 The report found that Network Rail was unaware that the “exceptionally heavy vehicle” which was subject to special requirements when on public roads, used the Bagillt crossing regularly.

Network Rail’s processes for risk management at this type of level crossing did not provide railway staff or road users with “a coherent and consistent process for deciding when a vehicle should be treated as as large, low or slow moving when using the crossing.”

And “did not provide an effective interface between signallers, crossing users and railway staff responsible for liaison with users and inspecting level crossings.

An observation identifies further shortcomings in the information provided to signallers.” The report states.

The RAIB investigation was also hampered because the On-Train Data Recorder was not downloaded from the train by Arriva Trains Wales before it was overwritten by more recent data, “because staff competent to do this were absent at the relevant time.”

The Rail Accident Investigation Branch has issued a number of recommendations and ‘learning points’ on the back of the incident, and say  Network Rail should seek improvements in its management processes for user worked crossings with telephones.

The report said “people requesting permission to take a road vehicle over a user worked level crossings should carefully explain the type of vehicle, state when it is large or slow moving, and provide a realistic crossing time.”

And that a “road vehicle should not be permitted onto a user worked level crossing without signal protection unless signallers have satisfied themselves it can cross quickly, is unlikely to become stuck and is not large.”

Full report and recommendations can be viewed here: Serious operational irregularity at Bagillt