Shortfall due to economic climate and drop in money left in supporters’ wills, charity says.

Mark Dowie: ‘We’re busier than we ever were.’ Photograph: RNLI

The chief executive of the RNLI has said that the lifeboat charity is facing the “perfect storm” of a shortfall in funds at a time when its services are more in demand than ever.

Lifeboat crews and lifeguards are being called out more often to save lives but the charity is suffering from a shortfall, largely created by the economic climate and a drop in money left to the charity in supporters’ wills. 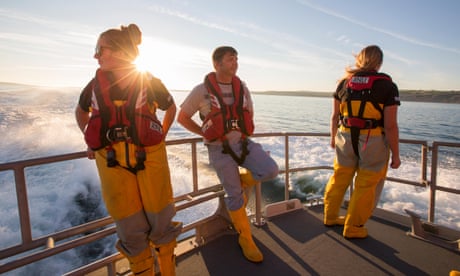 Mark Dowie said he hoped to make the organisation more efficient. He said: “We’re busier than we ever were. The service is spectacularly good. The whole population can be very proud of it but we do have a fundraising challenge.”

There are 238 RNLI lifeboat stations around the UK and Ireland and its lifeguards patrol more than 250 beaches in the summer.

Dowie, a former naval officer who went on to work in the banking industry, said: “When we see legacy income dropping and the need for the service increasing it is a confluence of factors that you could characterise as the perfect storm. It certainly concentrates the mind.”

The year before, the lifeboats launched 8,436 times and lifeguards responded to 15,558 incidents.

Dowie, who has been in post for four months, said: “As a people we use the sea in ways that change all the time. We have many more people working on the sea, things that we weren’t doing when we were founded, for example wind farms. But there is also a vast amount more pleasure activity in, on and around the sea.”

Dowie gave the example of Salcombe lifeboat station in south Devon, where he volunteered before taking on the role of chief executive, as an example of how the pressure on the service was growing.

When it was founded 150 years ago, the Salcombe station launched just twice to carry out rescues in its first seven years. Last year it launched 66 times. “It’s a completely different level of activity,” he said.

Dowie said efficiencies would have to be made – but would not say if any cuts were in the offing.

He said: “I’m going to have to ensure we’re running the service as efficiently as we can. I come from business and my experience suggests however efficient you think you are being, there are always ways to make yourself more efficient, We will be redoubling our efforts to do that.

“We’re looking at efficiencies across the spectrum. I don’t want to be drawn on exactly how we’ll get there. I’ve got to make sure we live within our means year on year and I also have to put myself in the position where I can look a donor in the eye and say: ‘I’m not wasting a penny of your money.’ That’s almost the most important thing to be able to say.

“I know how hard it is to raise money. I’m going to make sure we’re doing that as well as we can.”

Dowie said he hoped the decrease in bequests was just about “ebbs and flows”. He said: “We don’t have an easy way of getting statistics on why the amount of money from legacies was reduced.”

The RNLI is separate from HM Coastguard and independent of the government, relying on volunteers and supporters to run the service.

Founded in 1824, the RNLI says its crews and lifeguards have saved more than 140,000 lives, including almost 12,000 during the first and second world wars.

Dowie said it was impossible to say if Brexit or a recession if it comes will impact the situation. He said: “I don’t know if it will or won’t but the RNLI has been running for 195 years. We’ve been though two world wars. I’m sure with our volunteer team and the support of the general public we will weather whatever comes.”