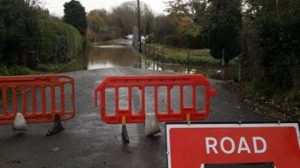 Seven people have been rescued after apparently removing warning barriers and driving – unsuccessfully – down a flooded road.

The occupants of two vehicles, including an 18 month old child, were taken to safety by firefighters after becoming trapped on Barcombe Mills Road in Barcombe.

East Sussex Fire and Rescue Service said the six adults and an 18-month-old child were released unharmed from two vehicles during the early hours.

Lewes Fire Station initially tweeted that they’d been called to assist overnight, and that the road remained closed today.

The fire service later issued a warning not to drive through flood water.

Sussex Travel Watch also tweeted that conditions are treacherous on several roads because of excess water, including Littlington Road near Seaford and Kings Barn Lane near Steyning.